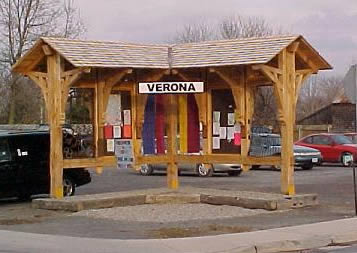 Located at the Verona Trailhead of the K & P Trail, at the corner of Main St. (Road 38) and Bellrock Road.

The Verona kiosk was a Millennium Project under the energetic and enthusiastic leadership of John McDougall. It was funded from grants through the Main Street Millennium Fund, South Frontenac Township, the Verona Community Association with the support of the Government of Ontario, through Ontario 2000 and the Ministry of Citizenship, Culture and Recreation along with generous donations of time and materials from local volunteers and professionals.

The project, designed to reflect the traditional styles of our agricultural and railroad heritage, was completed over several weeks by different groups of volunteer labourers with support from businesses.

Jason Gibson, of Gibson Timber Frames donated his time to teach and supervise the volunteer builders.

Stop by the kiosk to see if you can identify the six types of local wood that make up the structure - red and white cedar, white oak, white pine, spruce, and hemlock. Most of the timber was donated by Doug & Deborah Lovegrove and Inie & Peter Platenius.

Part of the landscaping includes paving with commemorative bricks, purchased by local families to help defray the cost of construction.

[an error occurred while processing this directive]